Dinner in a hurry

Taff has to be somewhere tonight. So food in a hurry. We bought 3 pork scotch fillet steaks on special - 8 WW ProPoints of deliciousness there so the sides needed to be pretty low in points values.

I really love Jane Kennedy's book Fabulous Food minus the boombah (apparently she does apps now too - how cool is that?) So we started off our plans with her Spanish mushrooms with thyme - we have fresh thyme from the garden and these are just heavenly. Here they are ready to go in the oven. There is wine, oil and yoghurt in these too but not a lot of anything so very low in ProPoints values. 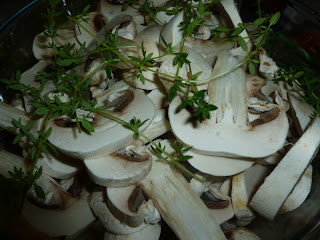 We also cooked her asparagus and cherry tomatoes - baked with garlic and olive oil this is pure deliciousness and has converted most of the monkeyhouse into asparagus lovers. (from the other book OMG! I can eat that?) The recipe is on page 132 with the salmon but we only cooked the salmon once - we do the vegetables at least weekly. 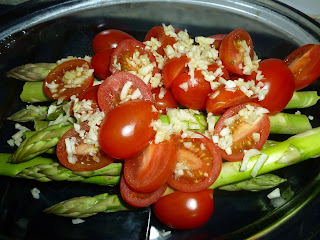 She mentions mock rice (which is actually cauliflower) in those books and I found detailed instructions on how to make it in my Thermomix here It is so easy to make - you just put your cauliflower in the TM31 like this: 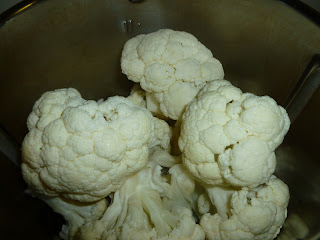 And after 5 seconds (yes only 5 seconds!) on reverse it looks like this, and you steam it for 10 minutes while the other food is cooking... really so easy 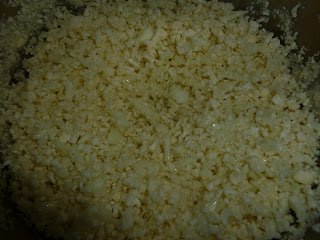 That left the pork steaks - how to quickly add flavour and deliciousness to them? I had bought some sichuan peppercorns for tomorrow nights meal so I went to the Thermomix Taste of Asia cookbook and made sichuan salt and pepper. Again so easy just bung it in, roast and grind and here it is. 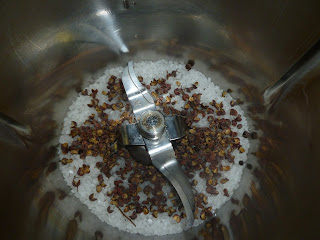 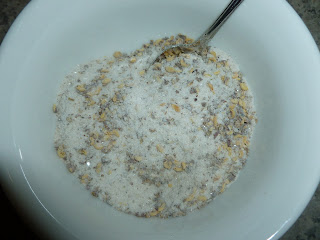 We put the vegetables in the oven, turned on the TM to cook the cauliflower and put the steaks on in my trusty cast iron pan - don't the grill marks look pretty? 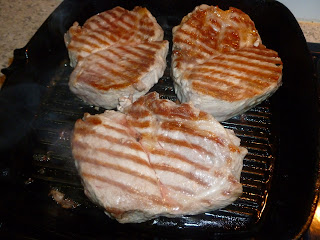 After they were cooked we rubbed them with the pepper mix and sliced them to serve. Here is the finished meal - only 12 Weight Watchers ProPoints per serve. 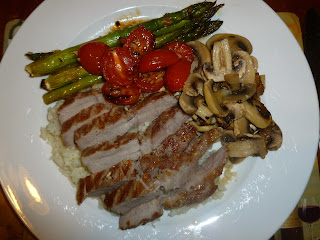