If you don't have the Thermomix Devil of a cookbook well you should. Just go buy it right now. Every dollar spent goes toward safe habitats for Tasmanian devils who are not infected with the horrendous cancer that is threatening to make them extinct. For more information check out the Devil Island Project.
Anyway we had the pleasure of attending a cooking class with Fiona Hoskin on Friday night and sampling this curry so I thought I would give it a try.
After a rough start when I discovered I needed fenugreek seeds not leaves, which necessitated a trip to the Oriental food store and caused me to buy delicious things to use later... I followed the recipe in the book but added a couple of extra tomatoes and doubled the chicken. 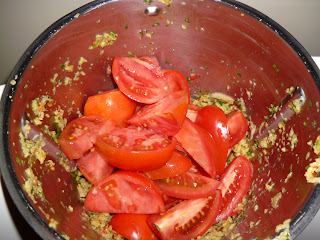 I am so glad I did because that is a LOT of sauce, and you can't just fill up on sauce and rice if you are counting points.
While it was cooking I went and cut some mint and pulled out my trusty stick blender. I know the TM does everything the stick blender can do (better, stronger, faster) but I can't afford a second machine and often mine is busy. Besides my stick blender is so pretty I couldn't let it go. If the Thermomix put out limited edition red machines it would sell like crazy.
So while the curry cooked I made a mint chutney. 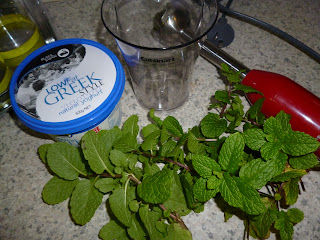 Use a bunch of mint, a spring onion, a shake of tabasco, 3 tablespoons greek yoghurt and a generous squeeze of lime juice. This is just so beautiful - to taste as well as look at. And it cools your mouth for hot curries (this one isn't hot by the way) 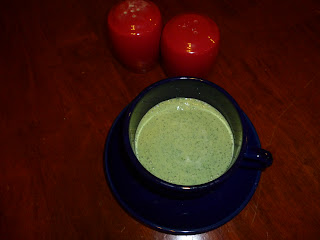 So after only about half an hour at home I have a lovely curry made from scratch. I needed to cook rice for the crowd, but as the recipe includes coconut cream there were really no points left to spare for rice for Taff and I so it was back to the old cauliflower trick. 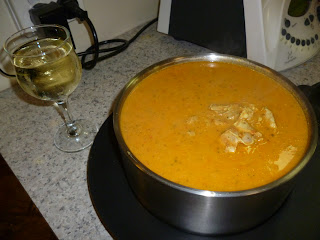 Which meant this delicious plate full came in at only 10 ProPoints so we had some roti bread too!